A fourth visit to Cambridge for the headliners, playing to a sold-out crowd.
John Paul opened the show with a short set of sharp observational punk poetry, with backing recorded on his phone. ‘Glasshouse Street’ was a key track, describing the Nottingham thoroughfare in vivid detail over some twisted lounge music. He quickly drew the early arrivers at the venue into his world; getting an encore then leaping the stage barrier to meet the audience.

After being main support for 30 shows so far on this tour, LIINES have cemented their reputation as one of Manchester’s premier exports. This power trio were a revelation – with a sharp Rickenbacker bass sound to die for, spicy guitar, an abrasive but yearning voice and a drum style that minimised cymbals blurring the beat in favour of rock-solid pulses driving the point home. The finished sound is tight and tense and many of the tracks were taken from their impressive 2018 debut album ‘Stop-Start’. Hypnotic, dynamic and hugely impressive this was their first time in Cambridge, but after the mighty reception they received I am sure they will be back soon.

Sleaford Mods have their own genre, a unique combination of social comment, observation and bleak comedy set to infectious beats. Tonight they were on top form from the off, as the stealthy deep riff of ‘Into The Payzone’ filled the venue and Jason Williamson launched into his vocal salvo.
‘Flipside’ is an unrelenting lyrical tirade ‘….Graham Coxon looks like a left wing Boris Johnson….’ and the bizarre narrative of ‘Stick In A Five And Go’ is a bass-driven sing-along crowd favourite. ‘Kebab Spider’ has the killer hookline ‘…Who knew?…’, as does ‘T.C.R’ ‘…total control racing!…’ but it is ‘B.H.S’ which really hits home, linking personal disintegration to the demise of the much loved retail chain.
All of these words are underpinned by Andrew Fearn’s sparse and incisive instrumental tracks – he switches them on and stands back, no pretence at manipulating and enhancing the sounds – after all they are already perfect. Bobbing around with a bottle of beer and off-mic vocal backing he is a affable stage presence, reflecting and contrasting with Jason’s dance moves and compelling voice.
The surreal bitterness of ‘O.B.C.T’ (Oliver Bonas Chelsea Tractor?) was the doom-laden end to the main set but the duo returned for more including the familiar paranoia of ‘Tarantula Deadly Cargo’.
They have a vast back catalogue to draw on and we certainly got some of the best of it tonight, including many highlights of recent album ‘Eton Alive’. The minimalist stage presentation focusses attention on the music and makes the whole experience brilliantly unmissable! 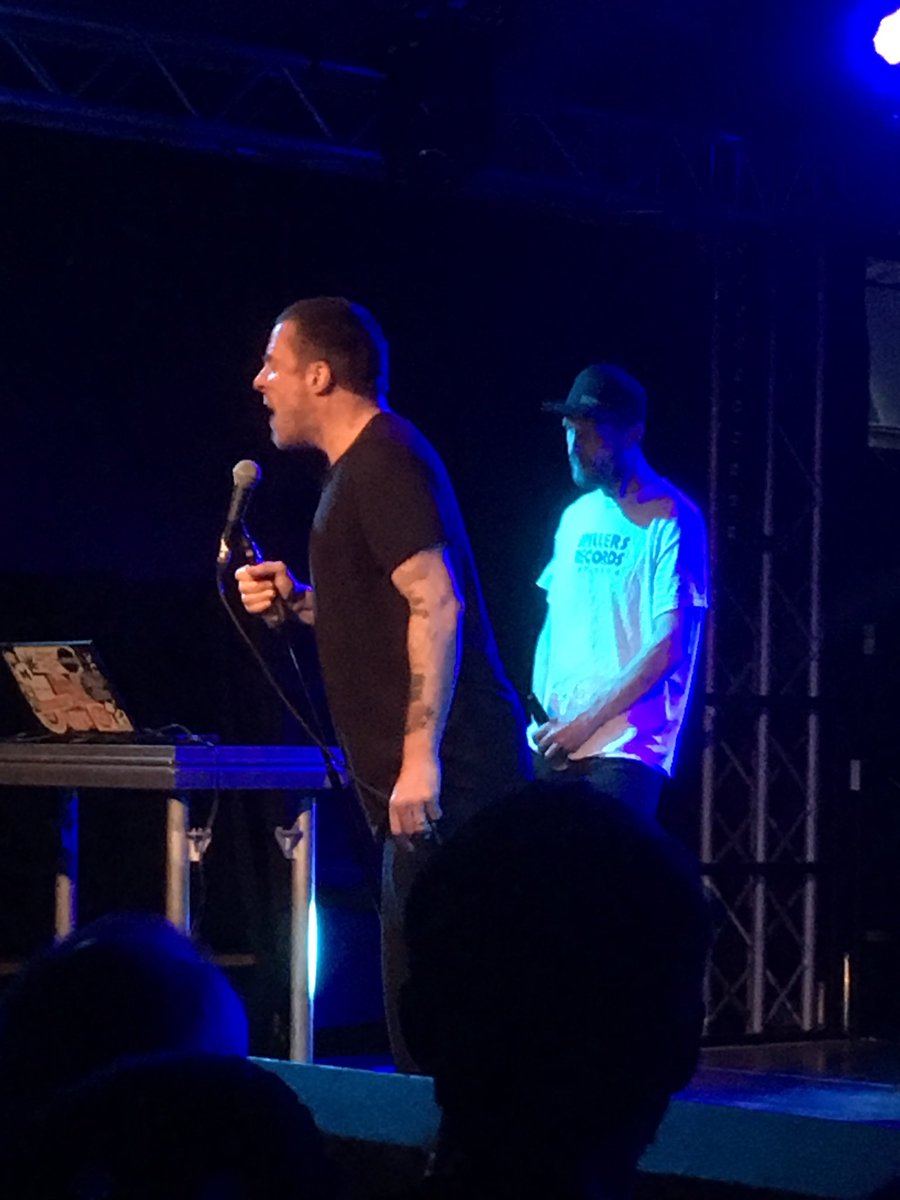