Cambridge Calling Volume 4 is a new compilation of tracks from musicians based around the Cambridge area, with proceeds going to Emmaus – a charity which aims to reduce homelessness.

1. The Rugs – Blame It On Me Upfront, sparse rocker driven by a guitar counterline and some well-placed handclaps.
2. Colour Sergeant – Now it’s colour Dense ambient layers and creative sampling make a spectral, descending waterfall. A luminous three minutes.
3. ncklcng – Sleeper in the Valley This one is a bit of a grower, busy and accomplished jazz-funk with sax and sharp bass.
4. Kammahav – MLIRIR An acoustic version of the track from their second EP, standing for ‘Modern Life is Rubbish’ and a mystery extra IR? ‘…fields full of skeletons….students on courses reciting white horses….’ populate the lyric as a strong rhythm guitar drives along like Gordon Giltrap’s cult instrumental hit ‘Heartsong’.
5. Luke James Williams – Still In Bed Brilliant song and performance, as previously reviewed on this site ‘…Sung with passion it is a standout track; a simple but stunningly effective ascending and descending guitar line is the only accompaniment to the emotionally raw lyric, coupled with a very attractive melody….’
6. RJ Archer and the Painful Memories – It’s Snowing In Hell As previously reviewed on this site ‘….adding an extra energy to the insistent riff, always returning to that great title line,‘…you tell me that you’re doing well, it must be snowing in hell…..’ With the gradually increasing desolation of the vocal it is a mini Tarantino movie soundtrack….’
7. SENEX IV – Valentine Dark rock from trio drilling deep into the mineshaft of Ziggy Stardust glam overlaid with a lovelorn lyric that doesn’t give up.
8. Moonstrips – Nothing Like You This has the initial flavour of echoey detachment of an early Pink Floyd piece then by adding extra noise to a full dense mix, the trio deliver a powerful rock song.
9. Kyanos – Egypt This four-piece draw on psychedelic and dream-like pop to construct a mainly instrumental piece which after gentle synths and a brief vocal sojourn surprisingly starts to rock out.
10. Cong-Fusion – Turned Tables Jazzy and with an 80s smooth sheen, this is an appealing and spirited pop song, embellished by electric piano, brass and a strong lead vocal.
11. Tribes of Europe – Intermission Sounding like it is straight from an imaginary film soundtrack, full of wide-open spaces and a restrained foreboding.
12. Annie Dresner – Nyack One of the brightest talents on the Cambridge indie-folk scene with a wistful reminiscence set over a gentle guitar and piano.
13. Absolute Beginners – Here Tonight Like a meandering river this sociable folky-rock track flows by and is a bit of a grower, winningly enhanced by the moog synth solo.
14. Pink Lemonade – Space Girl The poptastic trio have a new EP out but this is where their recordings started, as reviewed on this site previously ‘….they were out in the cosmos for two and a half minutes of power pop ‘….surfing the waves of the Milky Way…not your usual Friday, hey!…’, a burst of energy featuring a na na na na chorus, fuzzy guitar and as much outer space terminology as they can cram into the grooves. Follow that!…’
15. Slava B. – Games of System Singer/songwriter from Wisbech, sounding like more than a full band and with very distinctive vocals crossing between doom metal and The Ukrainians.
16. Future Now – Dying Universe Full-on rocker with prog rock storytelling and even though the song has many sections and paces there is no letup in the intensity over nearly seven minutes, good to hear the extended guitar solo ending too.
17. Karalinga – The Old Man Another track that grows in stature with each listen, reviewed on this site previously ‘… Laid-back semi-psychedelia driven along by an amiable saxophone line….’
18. Amethysts – Stones The gorgeous signature track by this soulful electronic duo; the voices, keys and guitar which sounds excellent live have transferred stylishly to this recording.
19. Lo-Grade Lawrence – Purple Pyramid An instrumental featuring dense layers of synthesisers, built around a steadily wandering theme and bass tone, garnished with other-worldly drums and percussion. 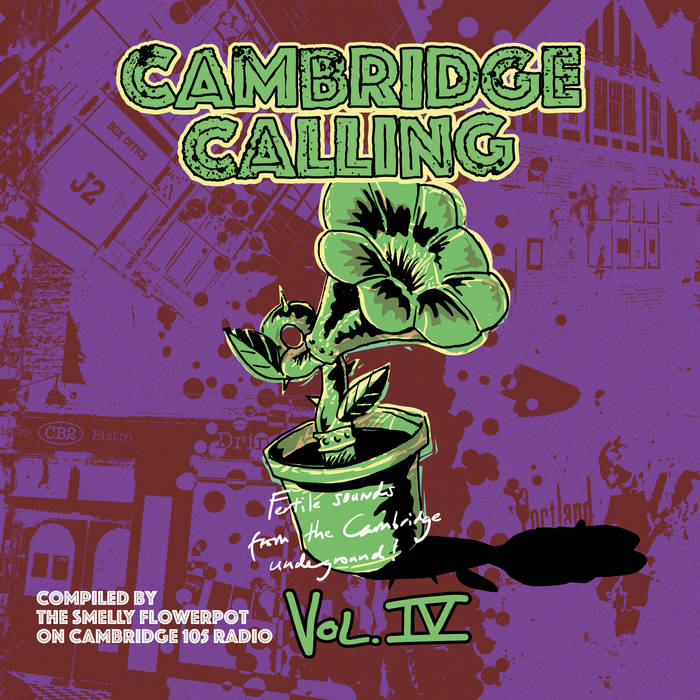