A recently released album from Cambridge quartet Moonstrips; a follow up to ‘Glimpses’ from 2016.

1. Heading For Dust Kicking off the collection is this riff-driven burst of rock energy, motoring along like a late 60s Who single. A brilliant effects drenched guitar solo kicks in near the end.

2. Suzette Previously released as a single this sublime two and a quarter minutes of garage rock has the constantly frustrated narrator detached from the mysterious Suzette ‘….you have so many faces, I always see them in many different places…’. There are plenty of instrumental and melodic twists and turn crammed into this compact track.

3. Ride To The Centre The original trio has now added a saxophone to the line-up and on this medium-paced track its plaintive theme line punctuates the vocal and threads effectively through the whole song, finally letting loose at the end.

4. Out Of Phase A lyrically dense, thoughtful piece with a riff reminiscent of Bryan Ferry’s twisted version of ‘The In Crowd’. Lounge music with sharp edges as the sax snakes subtly into the song.

5. Had To Find Out This is my favourite song; heard live it is a tour de force as the slow waltz time is pushed to its limits. Starting with just guitar and sax and a suppressed drum beat, the bleak lyric gradually builds up the tension of the narrative. Finally the guitar jumps to the front of the mix with a strident solo, counterpointing with the sax.

6. WLYYYY The title track is as strange and striking as the cover art, where a giant hare bestrides a motorway blocking the transit of an ice cream van following a sign directing it to moonstrips airport. It is an instrumental spectacular; busy bass and drums, yearning saxophone notes and guitar using all the tools and noises in the box to thunderous effect.

7. Reasons To Be Fearful Back to basics riff for this one, the faster tempo giving it a lighter, funkier feel than the rest of the album. Enigmatic lyrics keep an atmosphere of paranoia ‘…don’t read that book, throw it on the fire, its message hurts you and the author is a liar….’ The sax punctuates the track with a jazzy solo, before the big finish.

8. Think Happy Thoughts A pastoral, relaxed end to the album, built around a repeating guitar figure and pedal bass note. Never straying far from this structure the track eventually drifts off into the ether.

A formidable live band, Moonstrips have attempted to crystallise the energy and intrigue of their stage performance into these grooves. I think they have succeeded… 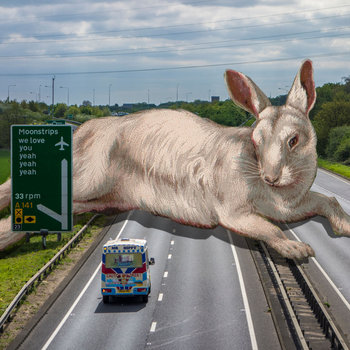