Rising from the ashes of the late Simon Jeffes’ pioneering ensemble Penguin Cafe Orchestra his son Arthur has now built on the legacy with his own compositions and re-imagined versions of earlier pieces performing as Penguin Cafe. The first half of the show featured the new LP ‘Handfuls of Night’, based on Arthur’s Greenpeace trip to Antarctica, embracing the mysticism of the landscape on tracks like ‘Winter Sun’ as well as the characteristics of four of the penguin species to be found there.

With a rock band lightshow and flanked on stage by two watching Emperor penguin head sculptures, this seven-piece incarnation of the band is a string quartet with added percussion, bass (electric and upright), harmonium and of course those rippling piano figures that drive many of the pieces. ‘Chapter’ is a perfect example of this, a lengthy meditation likened by Arthur to a 70s TV cop show theme (he carefully introduced each of the tracks played) whereas ‘Pythagoras On The Line Again’ is an experiment using beat frequencies, octave resonance and dialling tones.
My favourite is ‘At the Top of the Hill, They Stood’ with gorgeous impressionistic chord changes and a gradually building sound.

The second half was a trip through the Penguin back catalogue, with the familiar ‘Perpetuum Mobile’ and ‘Music For A Found Harmonium’ being very popular with the audience. A cover of Simian Mobile Disco’s ‘Wheels Within Wheels’ was an unexpected excursion and the show ended with the evocative ‘Rescue’, a soundtrack for a film yet to be made.
The Cafe in full flight is an immersive experience but perhaps the most affecting moment in the show was near the end when Arthur Jeffes played ‘Harry Piers’, a solo piano piece simply described as being ‘…written for my Dad…‘. This musical innovator died in 1997 (aged 48) but his musical inspiration is certainly living on. 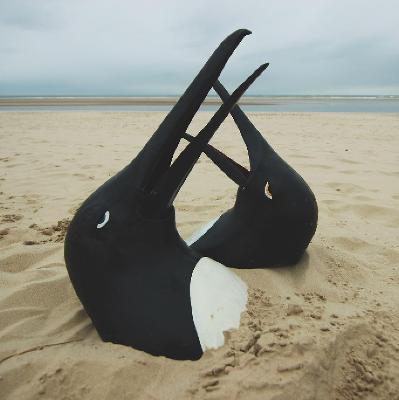