A big turnout for a Tuesday night at the Blue Moon, full of well-wishers for the upcoming appearance at the US ‘SXSW’ festival by Mammoth Penguins.
It was a cracking support bill too, started by Peterborough quartet SUDS. Opening with the catchy recent song ‘You’ll Feel Better’ the sound is immediately established; a warm, ethereal jangle-pop, topped with smooth vocals that float over jazz-infused guitar lines, a bass line that descends and garnishes reassuringly and drum playing that weaves everything together.
The breezy pop of ‘Evergreen’ was a highlight – this was their debut single and included on their EP ‘It Suits Me Well’, a fine collection soon to be added to with recordings of some of the new songs featured in this impressive set.

Last time I saw Goldblume they were playing live in a summer storm and as always generating enough energy to compete with the elements. Opening with ‘Fawning’, tonight they were showcasing the instrumental power and complexity when the ensemble lets loose, with math-rock time changes and the volume and dynamics of the trio constantly varying. A great communicator with an audience, singer/guitarist Jethro brings the lyrics to life with a vocal performance that cuts through the noisy wall of sound, especially on ‘Bleach’, one of their best songs.

Cambridge three-piece Mammoth Penguins have two excellent albums to draw songs from and they opened tonight with the compact and to-the-point ‘Propped Up’ and ‘Cries at the Movies’ from 2015. Emma Kupa’s vocals sound simultaneously disconnected yet right in the middle of the narrator’s viewpoint in the songs, especially on the more recent album tracks such as ‘I Wanna’, an uplifting and clear statement of love (‘….I wanna be waiting when your train arrives…I wanna save your life….’).
The tense longing of ‘Put It All on You’ with the lyric of contradicting pairs of phrases (‘….you filled me with confidence and then you drained it all out…’) is another highlight, especially when the band go into overdrive, as they also do on the power pop of ‘Cold and Lonely Place’.
Mid-set they perform ‘Closure’, one of my favourites and probably their definitive song in all areas, with the resigned melancholy of the vocal, the chorus that sounds suspended and unresolved and the bass and drums that alternately sit back then explode into action.
It was a standout set in an atmospheric venue…good luck at SXSW! 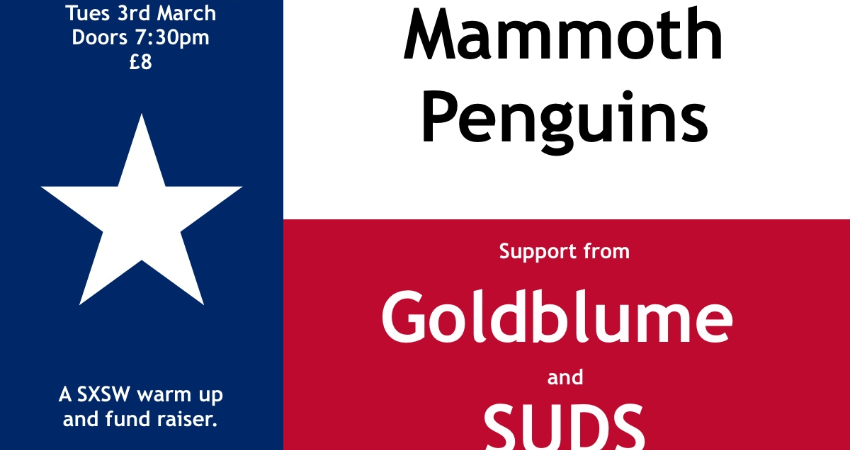 In their many years of extensive touring, the Wave Pictures had never played in Bedford, historic home town of John Bunyan, author of Pilgrim’s Progress. It was also new territory for Cambridge’s Mammoth Penguins, the opening act in Bedford Esquires; ‘one of the UK’s most beloved independent small music venues’.
Tracks from their superb debut LP (‘Cries At The Movies’, ‘Propped Up’ and the matchless ‘Strength In My Legs’) were mixed with songs from their new concept album where a person’s disappearance is described from the viewpoint of all the affected parties. As a power trio they produce a bold balanced live sound, with plenty of space for instrumental nuance and the subtleties of Emma Kupa’s sharp lyrics.

The Wave Pictures have a core of adoring fans and gather new converts whenever they come to town; their reputation for hard work is reflected in the news that they have two new albums out this year in June and October. This productivity rate results in a vast back catalogue and tonight’s show mines gems from this rich seam including the opener ‘Little Surprise’ and fan-favourite ‘Spaghetti’.

If you have never seen them before prepare to be impressed by the relaxed but confident musical interplay between the trio, the quality of the songs and of course the guitar playing intricacies from unassuming frontman Dave Tattersall unleashed early on in ‘Lisbon’ and especially later in ‘Tiny Craters In The Sand’.

Jonny Helm steps out from behind the drums for the affecting ‘Sleepy Eyes’ and Franic Rozycki constantly develops bass lines that mesh perfectly around each rhythm, as the style ranges between the rock blast of ‘Pea Green Coat’, the slower blues grind of ‘H.D Rider’ with new companion piece ‘House On the Beach’ and the effortless shuffling groove of ‘Before This Day’.

One of the only bands you will see who can take requests and instantly play them, we were treated to ‘Stay Here And Take Care Of The Chickens’ and an encore cover of the brooding blues ‘Green River’. The final song in the main set was the pensive ‘Like Smoke’, drifting upwards into the rafters and fading away into just the vocal refrain, as we all wondered when we could join them for the next show (It is Cambridge on June 23rd…!!)

A joyous confluence of the talents of singers/guitarists/songwriters Emma Kupa (also of the Mammoth Penguins, they have a new concept album due soon) and Darren Hayman (currently engaged in the ‘Thankful Villages’ music and arts project, commemorating the villages where all the soldiers in World War One returned home).

Opening track ‘Let’s Do Nothing’ is perhaps a surprising choice to start, it is the longest song and is a slow-burning musical dialogue between the couple. Layered with bittersweet regret and ambiguity behind the sung words it is given the time to build the emotion.
‘No More Bombs’ continues the lyrical tension and traded words but this time over a delicate summery guitar and a quick bass solo. In ‘Red Petals’ the two voices blend in harmony with an up-beat chorus. ‘Over’s Now Overdue’ is a beautifully crafted pop gem, with the irresistible title hook, the band sounds like they are having a great time too. ‘Do You Know’ is a real grower, nostalgically romantic in its simplicity.
‘A Tent Of Blankets’ has the biggest chorus on the LP (…I want you to always be there…) and it works a treat, ‘Pretty Waste Of Time’ is an affecting country ballad.

Emma sings solo for the gorgeous ‘Reach Out’, a subtle and sensitive lyric with acoustic guitar picking and gentle bass, then grand finale ‘Then We Kissed’ showcases how well these songs work with the dual voices.

There are other excellent tracks too and although there is no appearance for previously released single ‘Someone To Care For’ which is also a very fine song there is more than enough to sit back and indulge in here.

Opening the show tonight Mammoth Penguins played new and older songs, starting with ‘Cries At The Movies’ and ‘Propped Up’, two of many highlights on their debut album ‘Hide And Seek’. Released in 2015 it is a glorious package of hooks, fuzzy guitar and exuberant bass and drums, topped off of course by the carefully crafted words and spot-on vocal delivery from Emma Kupa.
In a live setting you can appreciate the musical extras, like the fathoms-deep rolling bass on ‘Played’ and some great drumming fireworks on a couple of the new tracks, hopefully destined to be on a follow-up album soon.
I was glad that what is for me their definitive song ‘Strength In My Legs’ was in the set, a super-poppy blend of vulnerable lyrics and powerful music.

Hannah Lou Clark is a singer/songwriter/ guitarist, fronting a quartet playing some atmospheric Indie rock to celebrate the release of new guilt-edged titled EP ‘The Heart And All Its Sin’. From that disc, the dual salvo of ‘Matilda’ and ‘Don’t Sweat It’ are stealthy, restrained build-ups to memorable choruses.

Introduced simply as ‘..a love song..‘ the ballad ‘We’re Rich’ is a show-stopper; over guitar triplets the plaintive emotional statement unfolds, as the instrumentation gradually weaves in the layers. Wow, just how good was that?

Back into rockier territory for ‘It’s Your Love’ and we also hear the unexpected bass noises and drum pattern of ‘Silent Type’, showing that the band is not afraid to stretch the sonic boundaries.
The anthemic, stately ‘Grief Underneath’ is a big finish to the show with crunching guitar echoing around the appreciative crowd, already won over by some good interaction from Hannah during this well-paced, energetic set.

A tasty free gig at the Corner House, with Violet Woods (reviewed extensively elsewhere on this site) sounding on great form, big echoing twelve string, organ and explosive drums all in place and bass player Mark Boxall featuring in Mammoth Penguins later too. As well as songs from their self-titled album there was also a new unrecorded song and a French interlude to celebrate Bastille Day.

Violet Woods have an album to be proud of, as now do Mammoth Penguins, with new disc ‘Hide And Seek’ forming the majority of their set. The packed-in and very hot audience warmed to the stripped back and very tight sound, a balance that often only the classic guitar, bass, drums line-up can achieve. Emma Kupa sings tales of grown-up disappointment, regret and hope, mostly distilled into three minute bursts of indie joy with biting lyrics floating on great bass/drum interplay and sharp guitar.

‘Propped Up’, ‘Played’, ‘Strength In My Legs’ are all neat snapshots and ‘March Of The Penguins’ is pure pop delight cloaking a bitter summary of rejection. A promising unrecorded song ‘Put It All On You’ showed a different direction with all of the band contributing vocals and then they finished with the dark chronicle of perceived failure ‘When I Was Your Age’ with the closing line ‘I’m going nowhere…’