A new six track EP (LP?) of mystery and imagination from enigmatic Cambridge songwriter/performer Trick Bird. Who knows, it may or may not be named after the semi-cult Francis Ford Coppola movie, a film that portrays some of the paranoia that seems to pervade many of these tracks?

1. Holly Holy. Up-tempo opener rolls along nicely with some glistening guitar and irresistible hookline chorus. Not sure who the heroine is but she sounds like potential trouble, lovely sparkling short solo near the end.

2. Can You See Me? Overlapping and echoing vocals at the start then the ‘band’ crashes in to turn this into the most immediate track on the album, a sort of brooding, pulsing, melodrama in the style of underrated electronic troubadours Teleman.

3. Our Lives. An organ driven sound on this song, including some 1970s type built in percussion patterns. The different musical textures drift in and out and a wistful but sinister vocal describing scientific advances and their consequences.

4. The Conversation. The longest track on the album, staring with a country harmonica vibe it is a duet with talented guest vocalist Gabriella Davalos about a disconnected relationship (‘…when twenty-six letters aren’t enough any more…’). Another voice and a soundtrack sample is in the background; it is a complex, rich and rewarding track with a possible fantastical resolution (‘…you dream of riding wild horses in fields of gold…’)

5. Eye To Eye. A short and subtle ballad with combining voices backed with smooth and evocative strings from Cambridge musician Sharon Sullivan of the band Keltrix.

6. Another Heist. A simple descending chord figure on the piano is given plenty of space, driving the song above a montage of passing sampled sirens and featuring a floating, dream-like lyric. 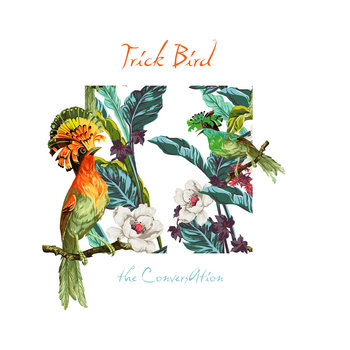 The new EP from Cambridge musician Trick Bird, a collection of self-penned tracks, well-crafted inviting sounds with their apparent summery lightness tempered by a darkening edge.

1. Window. The title song is a catchy pop tune, nicely arranged with a distinctive hook in which the narrator is fascinated and tempted by a vision/imagined temptation in a window, but like Odysseus drawn to the Sirens’ enchanted call you sense it would not end well.

2. Horizontal View. A similar musical feel to track one, evolving from an echoing guitar intro into a more complex sound. A slightly sinister lyric about snow, forests and hidden paths. Driven along well by drums and multi layered guitars, but still a feeling of claustrophobia..

3.The Great Escape. Pulsing bass line with almost whispered vocal, not sure what the paranoid singer is escaping from, this one is all about texture and ambience.

4. Chase. Relaxing acoustic strumming and a gentle repeating guitar line coiling around the layers of other instruments floating in and out, including some rather lovely strings taking over at the end..

5. Sleep All Day (Dream All Night). A suggestion of early Pink Floyd or Genesis (1970 album ‘Trespass’) for this song describing cycling through a graveyard and then becoming enveloped in its more mystical elements (like the ivy entangling the gravestones?). It is my favourite track, a sparse but rich arrangement, with atmospheric keyboards and more strings..