A track by track review of the new album from Bob Dylan, his first collection of original material since 2012.

1. I Contain Multitudes. Pre-released as a single, over an almost ambient acoustic backing this time spanning meditation places the narrator in the midst of cultural icons and emotional experiences. It would be a central track on a lesser album; here it is one of many major highlights. The line ‘…I play Beethoven sonatas Chopin’s preludes…I contain multitudes…’ could only be rhymed and delivered by Dylan.

2. False Prophet. The tracks on this LP are long, even this loud languid loose but edgy blues clocks in at six minutes. Its like a cut up script for a mythical western, packed with restless one-liners ‘…don’t care what I drink – don’t care what I eat…I climbed a mountain of swords on my bare feet..’

3. My Own Version of You. Gothic and comic, the descending chord sequence cascades calmly as a tale of creating an ideal being is laced with name checking, ‘…..I’m gonna make you play the piano like Leon Russell… like Liberace…like St. John the Apostle….’ then encompassing a circle of history and philosophy. An excellent track on first listen then it gets better.

4. I’ve Made Up My Mind to Give Myself to You. Set to a stately but subtle classical waltz theme this is an unassumingly gorgeous love song. For fans of ‘Make You Feel My Love’ from 1997’s ‘Time Out Of Mind’.

5. Black Rider. A gentle but dark interlude; a jazz guitar chord rolls across the start of each bar as Dylan sings homage, fear and redemption to the title character.

6. Goodbye Jimmy Reed. A bar-room brawl twelve-bar celebrating the influential bluesman (1925-76). Good to hear some harmonica in there too.

7. Mother of Muses. Stately and thoughtful, describing mythology and music history as the narrator draws multiple inspirations before the poignant ending ‘… got a mind to ramble – got a mind to roam….I’m travelin’ light and I’m slow coming home….’

8. Crossing the Rubicon. Like the opening line of a novel, Dylan pulls the listener in with ‘….I crossed the Rubicon on the 14th day of the most dangerous month of the year….at the worst time at the worst place…’ followed by seven minutes of searing guitar-led but still mellow backing and every verse ending with the title phrase. It is an effective lyrical device, echoing the classic ‘Lily, Rosemary and the Jack of Hearts’.

9. Key West (Philosopher Pirate). Another lengthy musing, a cryptic travelogue featuring a sleepy accordion and some of the most evocative descriptions on the album, ‘….people tell me that I’m truly blessed…bougainvillea bloomin’ in the summer and spring…winter here is an unknown thing….’

10. Murder Most Foul. This too was pre-released as a single(!) and it is granted a whole extra CD on the album release.
The track is a detailed news description of the assassination of JFK ‘…Zapruder’s film, I’ve seen that before…seen it thirty three times, maybe more…it’s vile and deceitful – it’s cruel and it’s mean…ugliest thing that you ever have seen…they killed him once, they killed him twice…killed him like a human sacrifice..’ weaved through with a celebrity cast, cultural touchstones and influences of the 60s and beyond.
It is a towering achievement; the dense tapestry of words and ideas needs to be savoured at length to be fully appreciated. 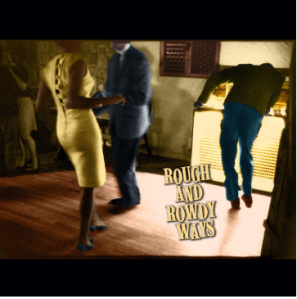 That Christmas album may be some sort of starting point for his new disc, ‘Shadows In The Night’, a set of smoky, late-night versions of songs that were part of Frank Sinatra’s repertoire. I had accepted the evolution of his voice down an ever deepening gravel path but this album seems to reverse that and he is back to a more flowing, smoother singing style. Each song is a conventional statement of love or loss, though often with the lyrical twists inherent in some standards of the genre. Bob could easily have contributed his own compositions in this style, he has many examples, such as ‘Make You Feel My Love’, a low-profile but emotional highlight from 1997 (later turned into a global mega-seller by Adele), but this themed covers collection works very well.

Opener ‘I’m A Fool To Want You’ slides in gently with pedal-steel guitar and sets a subtle musical tone with minimal instrumentation that carries on through the whole disc. Cleverly titled ‘The Night We Called It A Day’ steps up the pace almost imperceptibly, followed by the more stately stride of ‘Stay With Me’, released as a single. Lose yourself in the long introduction and the unbearably sad lyric of ‘Autumn Leaves’, enjoy the relaxed mood of ‘Why Try To Change Me Now’ and the well-known ‘Some Enchanted Evening’. The evocative mystical minor chords of ‘Full Moon and Empty Arms’ and the understated desperation of ‘What’ll I Do’. And two more for you to discover…

I don’t think it will quite join my list above, but it is a fine, atmospheric, intimate and emotionally-charged album, superbly played and sung.