With an electronic swoop, UK pop composer, singer, instrumentalist and producer Hydra Lerna presages her new single with words that get straight to the point ‘…you can’t say that I’m not damaged, the scars are on my back….you know that I come with baggage, we have to face the fact….’

As the percussion threads through the stark but lush synth notes we soon get to the uplift of the chorus ‘…I’m ready to be OK again…’. Hydra has a track record of dynamic, soul-searching singles where the often dark tone of the lyrics ( ‘…touch me like a razor, hold me like a bed of nails…’ from last release ‘Camera’) is always tempered by a gift for melody carried by her rich soaring voice which adds a balance of optimism to the whole.

This release is the last one before a creative break to realign her musical career and it is a fitting temporary finale; memorably the music rolls, pushes and pulls like gathering storm clouds before the sun breaks through. In the eye of the hurricane of swirling keyboard layers and textures the multi-tracked voices add a lushness and grandeur to the resolution of the title line.

The last acapella lines float away into the ether and her single unadorned voice is the final sound we hear for the present from this talented and enigmatic performer. 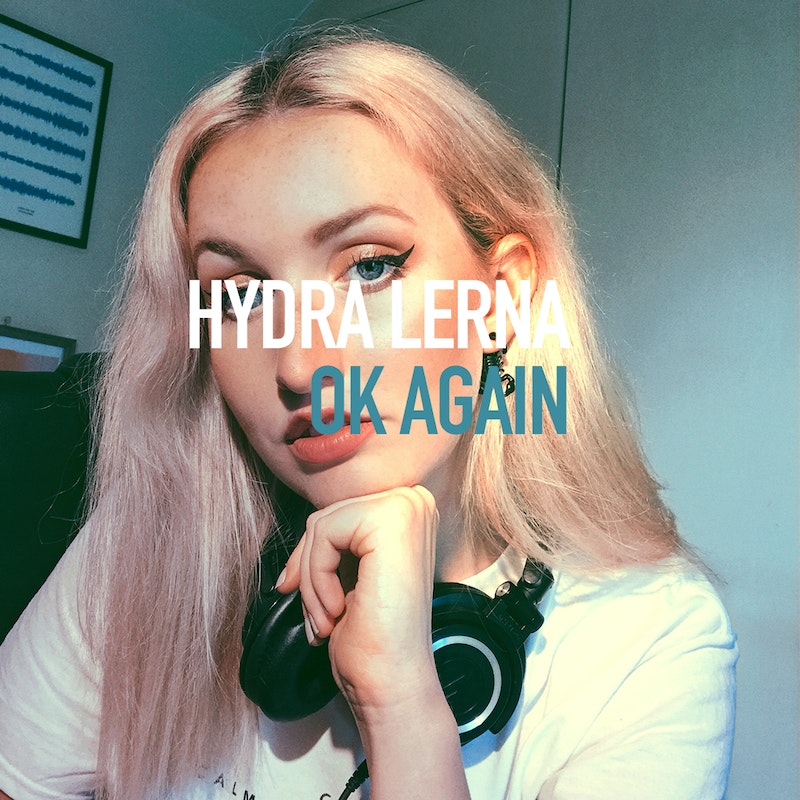 ‘Camera’ is the stunning new single from singer/composer/musician Hydra Lerna, self-produced as always and this time moving into a lighter pop groove. Despite the summery flavours of the music, there is a darker side in the lyrical conflicts of the narrator being in a difficult relationship, not quite sure of the conclusion but aware of the positives (‘….It’s a hundred degrees outside…but in here it’s intensified….’).

Many of her songs show that Hydra Lerna has always been able to turn a lyrical phrase inside-out and use some evocative imagery ‘…hold me like a bed of nails… I think I found my holy grail…’ and explanation ‘….it is all in our flawed design…puzzle pieces with jagged lines…’. But the situation described here is sort of equal, with the slightly sinister pay-off ‘…when we’re hanging in the balance….I’ll have the photographs of you…’

It is a lyrically dense and thought-provoking song and the music reflects the ebb and flow of the words; based around two six note keyboard figures there is a deep bass counterpoint and subtle percussion.
Hydra Lerna is a talented harp player and has featured this on some of her previous tracks but this time the unique instrument has been left to gather dust in the studio cupboard; as she explains “There is no harp in Camera at all sadly, just synths! I moved away from it for this track because I wanted to be free to create something upbeat and dancey, without feeling like I needed to sit and write with the harp”

The innovative video features lots of secret filming in Norwich city centre shops, as Hydra links together the photography of the video-watcher, herself and the surroundings and looks like she is having great fun in the process! 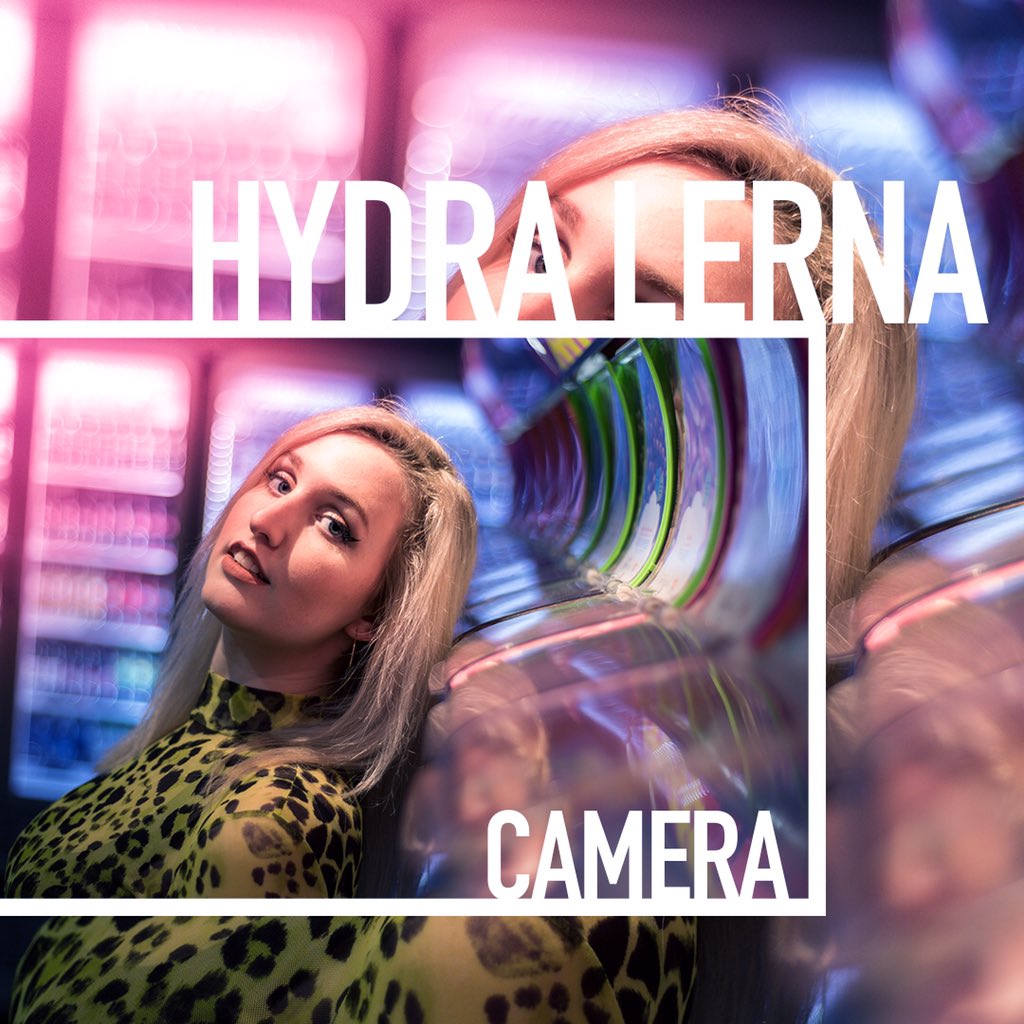 Curated by composer/performer/producer Hydra Lerna and following a similar evening at The Birdcage in Norwich the night before, this was a showcase for upcoming artists with a spirit of independence in their music and electropop sounds underneath distinctive voices.

It was a Cambridge debut for multi-talented Caii, having travelled down from Manchester. New single ‘Fuel’ was a fine summation of her sound; with big bold beats and haunting synthesiser layers integral to a soaring vocal. It is a dark lyric but the performance lifts it into the positive. With live synth drums to add drama, a new composition performed at the piano and a moving cover of Chris Isaak’s ‘Wicked Game’ this was a strong start to the evening and her likeable personality really shone through.

Currently working on their debut album, Amethysts were last in Cambridge at Strawberry Fair earlier this year, their sonic landscapes floating across the midsummer sunset. The formula works too in the intimate confines of the Blue Moon, as the duo invite you to lose yourself in their unique and haunting tunes. Signature track ‘My Love’ sounded as good as ever and this million-streamed track was one of a succession of high quality single releases that were featured in their set tonight. Echoing guitar weaved between the keyboards as the vocals and harmonies added the magic.

Hydra Lerna opened with her last single ‘In The Dark’; a statement of musical and lyrical intent with a complex instrumentation never losing sight of the stately rhythm, especially when the full bank of synthesisers arrive in the mix. Her songs are from the heart, with personal themes that sometimes transcend conventional pop territory but always with an ear to a good pulsing groove. She is a talented harp player and it can often take to the stage as a ‘second band member’ but tonight it featured only in samples and unique tones in many of the songs, especially the darkness of ‘Angel V. Psycho’. Early track ‘Clean Like You’ gave her vocal a full range, with 80s analogue synth tones that also appeared in one of my favourites – the sparse but effective ‘Distraction’.

The thoughtful and haunting ‘Reckless’ closed the show, a superb end to an excellent evening which showed the musical talent that is out there waiting to be fully recognised.

The resonant words paint pictures of love and loss, with some acute phrases ‘…our skeletons are kindred…’, ‘…the silence never rang so loud….’ The lyrics thoughtfully reflect the mood, beautifully framed by the sheer power of the music. Here the layers of synthesisers sound like they were recorded in a cathedral, filling the vast space above as a deep and organic bass pedal strides underneath.

The title evokes ambiguous sentiments; it could be applied to being lost in an oppressive relationship or the negative feelings created. But ultimately this is a song of optimism and moving forward – identifying the problem as a first move towards empowerment and importantly the realisation of not being alone in the situation.

Hydra Lerna is a talented harp player; on this track it is sampled and contorted as part of the sonic palette, but it is the overall effect of massed keyboards, subtle percussion and her pure, emotive singing voice that is mesmerising.

The narrator finishes on an upbeat but slightly sinister note ‘…he won’t get away…we’ll get justice…’ which fades away on the track but stays and lingers with the listener…. 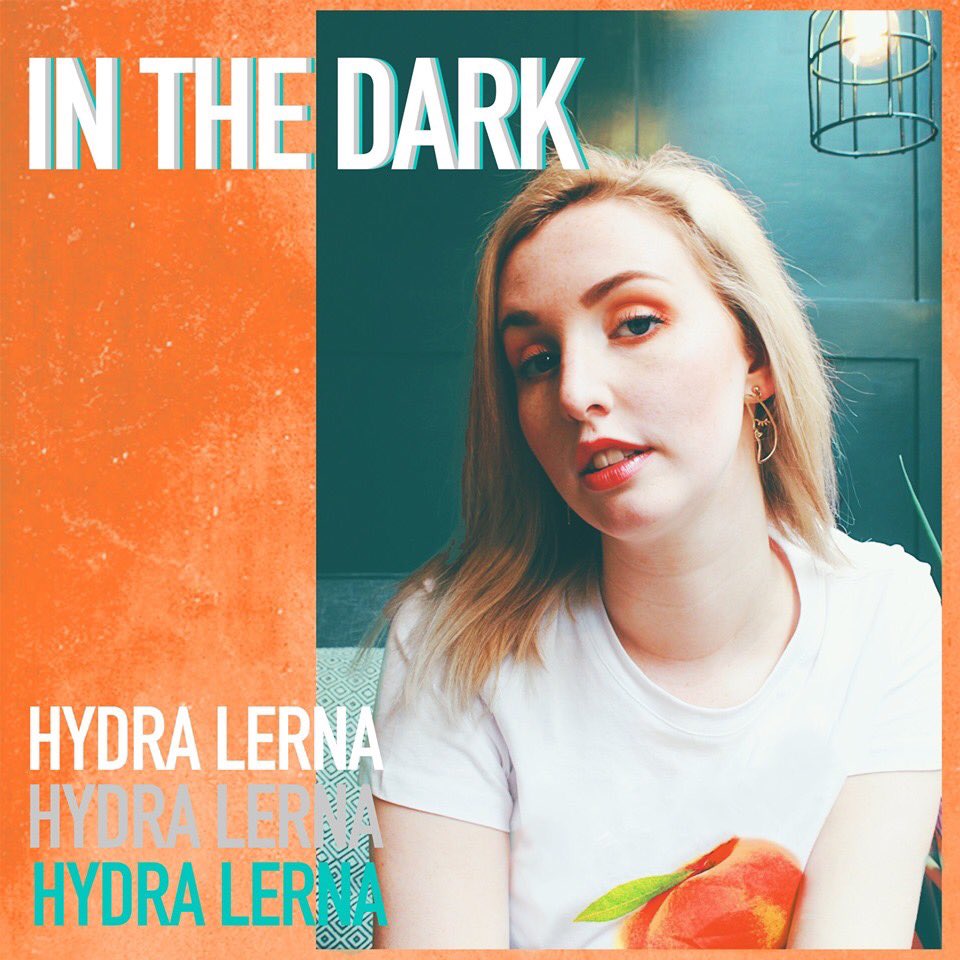 This was the sold-out launch of second EP ‘Blindside’ from singer/songwriter Caswell, and was also a showcase for two other very talented performers in an excellent venue.

There was already a substantial audience when Alfie Indra started his set with ‘Hard To Cope’. His recorded songs and live performances are normally with a full band but tonight we had the low-key backing of 4-string tenor guitar or electric piano allowing the lyrics to shine through. His vocal style was well suited to this intimate performance space. New single ‘Monster Under The Bed’ and ‘Cool People’ (with crowd joining in) were particularly impressive.

Hydra Lerna is a multi-talented songwriter/singer/producer; creating her original music from electronic loop patterns driven by keyboard and an instrument not often seen in this setting, the harp.
Current single ‘Reckless’ was the stylish opening track; with distant, longing synth tones and a waterfall of strings establishing the structure ready for Hydra’s rich, compelling vocals. The song builds up into a many-layered soundscape with glorious recurring chorus before fading back to just the harp.
In ‘Angel V. Psycho’ the harp sound is processed into a tortured electric guitar tone weaving through a personal lyric set to an easy, relaxed rhythm then the heartfelt words of ‘Distraction’ were explained to the audience before the sparse electronica made the point elegantly.
A solo harp version of Dua Lipa’s ‘Electricity’ fitted in smoothly before the uptempo finale ‘Hydra’ brought this stunning set to a close.
(Hydra Lerna is playing her debut Cambridge show at the Blue Moon on September 27th, see you there!)

With nearly half a million streams on Spotify, ‘Animal’ was a strong set opener, its soulful groove immediately showcased Caswell’s expressive vocals. ‘Surface’, my favourite song from the new EP featured early on with its anticipation-building introduction resolving into a hypnotic anthem. This was one of the many songs that highlighted the dynamic range of her three-piece band; going from subtle keyboards and busy percussion to bold brushstrokes of electronics and thunderous bass during the show.
We were treated to a mighty re-imagining of Portishead’s ‘Glory Box’ with its familiar descending chord sequence underpinning vocal fireworks, contrasting with the restrained emotions of ‘Cry’, a gorgeous ballad from Caswell’s well-received first EP ‘The Shadow Aspect’. From that same release it was ‘Dance Sober’ that really set the room alight – it is the sort of song that you think must have been a huge hit already and this extended version pushed all before it, Caswell’s voice scaling the heights, the band letting loose and a guest rapper included too!
After the adrenaline filled set, the calm encore of ‘Brother’ was a calming, thoughtful end to the show, sending a very fortunate audience off into the night.

A new self-produced EP from Norwich based singer/songwriter/instrumentalist Hydra Lerna, building musical textures around her harp-playing and electronic treatments.

1. Reckless A distant tone introduces a recurring loop figure on the harp, other sounds drift in and out but the gorgeous vocal really lifts the song; understated but intense ‘…it’s clear that I know what I want and it’s becoming an addiction, you’re becoming my addiction….‘ The soaring chorus melody carries all before it and electronic percussion patterns and bass pedals help to build up the drama. This a stunning start to the EP.

2. Angel v. Psycho This is a bit more sparse and spiky with a processed voice, creating a darker atmosphere and never quite revealing where it is going.

3. Distraction This short analogue-toned electronic interlude floats dreamily in some alternative space, gradually adding the layers and the repeated title to enhance the mystery.

4. Hydra – Remix Back to a more conventional song structure here for this description of a relationship intertwined with a lyrical identification with the ‘Hydra of Lerna’ of Greek and Roman mythology. The staccato musical core of the track flows into a busy percussive chorus ‘…you’ve got power but I’ve got poison, I can take you down…’.

5. Birdcage – Remastered A waterfall of lovely harp triplets roll through the start and are never far away in this anthemic piece. A lyric of escape gives way to an instrumental coda; this is another track that shows the creativity, imagination and potential of this talented performer. 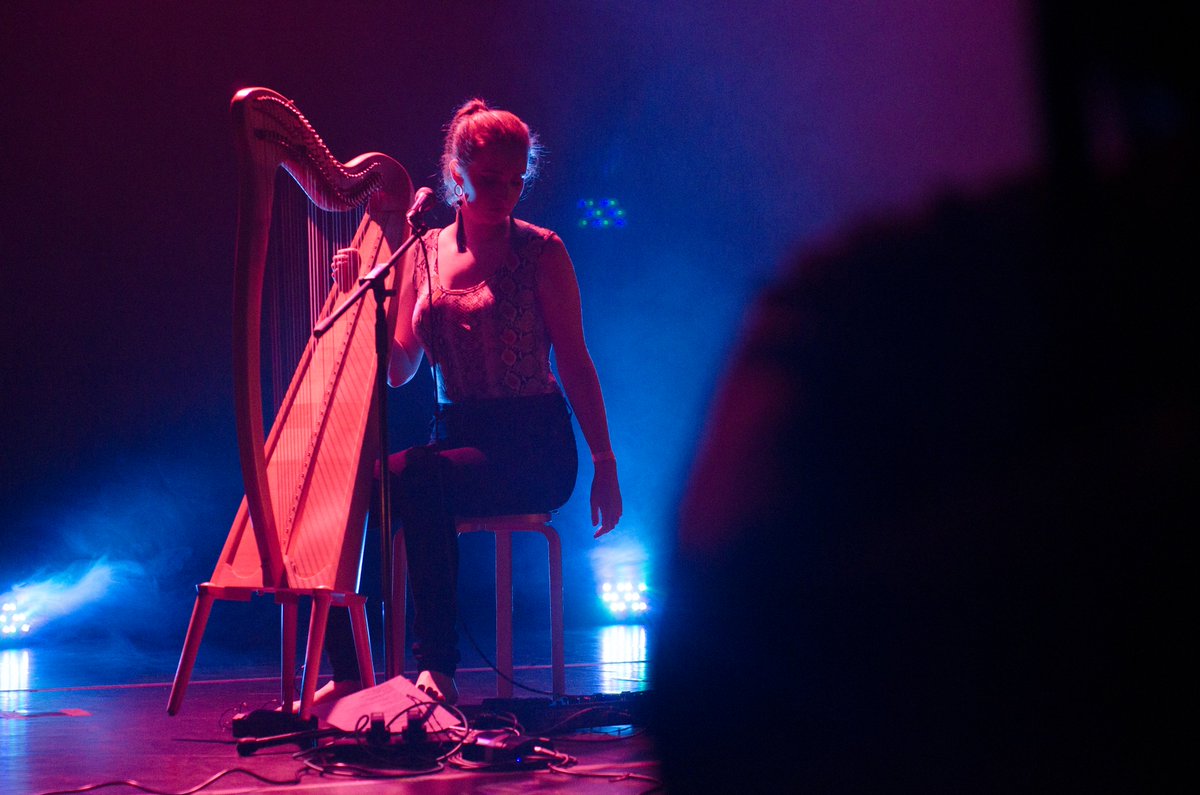