The Strawberry Fair – Cambridge’s highly regarded free festival of music and culture is a platform for a huge range of talented acts, many drawn from the local area. Featuring on the Cambridge 105 stage on this still and warm evening, Amethysts are two performers who continue to build a following for their interweaving of ambient, atmospheric electronics with sublime pop sensibilities.

Opening track ‘Stones’ sets up a sparse but smooth rhythm pattern as keyboard loops and embellishments are added by the duo. Creative live guitar parts played by Simon complement the brilliant voice of singer Clarice. ‘How It Is’ has an infectious chorus and some neat vocal harmonies to add to the atmospherics.

Early single ‘My Love’ has now amassed one million streams with its heartfelt lyric and subtle melody. As it was a festival audience the band played a cover; ‘Dreams’ is not my favourite Fleetwood Mac song but there is no doubt that they did justice to the longevity and classic status of this much-loved track with a restrained, echoing instrumentation and powerful vocal.
Recent single ‘Imitate Me’ is more uptempo with some busy percussion loops then the closing ‘Alone’ built up from a distant horizon of sound into a glorious finale with an impassioned emotional message and some bold pulses of electronic punctuation.

(Amethysts will be appearing at The Blue Moon, Cambridge on 27 September 2019) 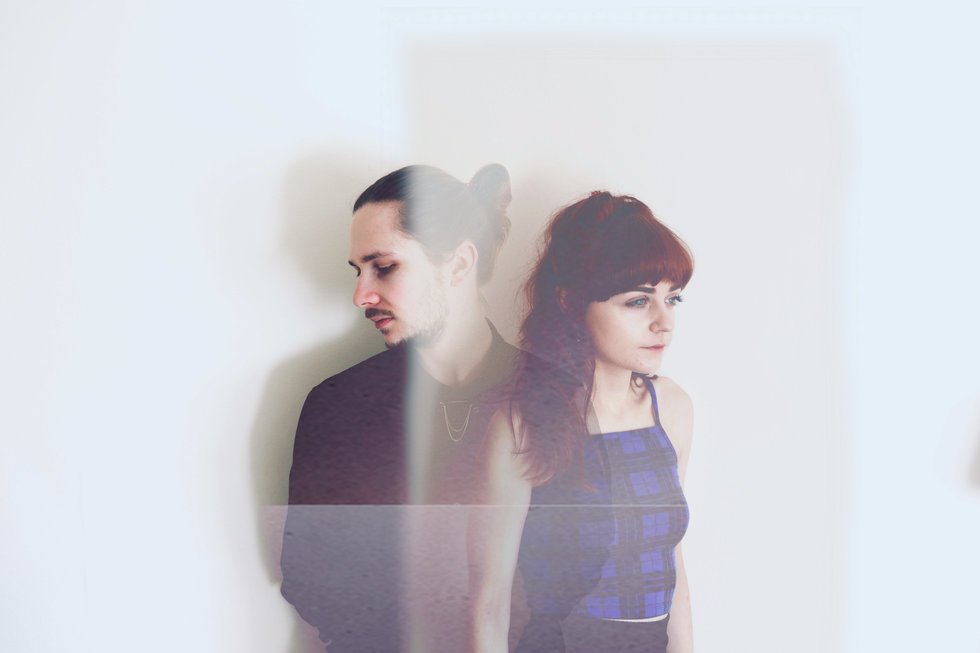 Since its beginning in the 1970s, Strawberry Fair has become a much-anticipated fixture on the Cambridge summer calendar. Full of colour, costume, protest, food and drink it is still primarily a free music festival with upwards of 100 acts on show, only a few of which I was able to stay to see this time round.
Some years the event can be slow to get going but this time the weather brought out a substantial crowd early on, including an appreciative audience for The Scissors opening the Rebel Arts Stage at midday. After a decade at the forefront of the Cambridge scene they can still strike a pose and rip it up with the best of them, aided by a selection of their own fastest and loudest songs, including I thought an extra turning up of the blazing sound system to a volume beyond 11 halfway through the set. Having seen them recently in the confines of the Cornerhouse venue, their rich and hypnotic swirling sound easily steps up to an outdoor show.

Meanwhile in the Portland Ballroom (a large tent with excellent ale bar) Garden Birds were on stage; singer/songwriter/guitarist Sarah Taylor-Morris accompanied by another guitar and with an extra enhancement of five backing singers to add an ethereal choir to her uptempo folk tales.
Next on were indie fun-folksters Jacquie And Geoff, the duo joined by electric upright bass, percussion and the lushness of a clarinet. It was all enjoyable feel-good stuff, even with an occasional ukulele showing its ability to sound uplifting and melancholic at the same time.

Cambridge 105 radio have many ways of promoting local artists, with dedicated specialist DJs and the very popular ‘unsigned chart’. Here they host a stage, showcasing local artists of all genres; we caught the end of a set by Ffion Rebecca, originally from Wales but now living in Cambridge and making waves on the local music scene. Performing her own songs and covers she has a rich and versatile voice and a confident stage presence, accompanied by some jazzy stylings from her companion’s acoustic guitar.

I last saw guitarist Kimberley Rew guesting with cult legend Robyn Hitchcock two weeks ago, now here he was on the Flying Pig stage as the lynchpin of the band Jack, a good-time blues-rock band regularly gigging around the city. Rew is not an extravagant soloist, his short and spicy guitar lines and chops weave effortlessly over rock solid bass and drums and complement the traditional blues vocals. Definitely a band and vibe to savour as the afternoon turned to evening and the crowds continued to arrive…